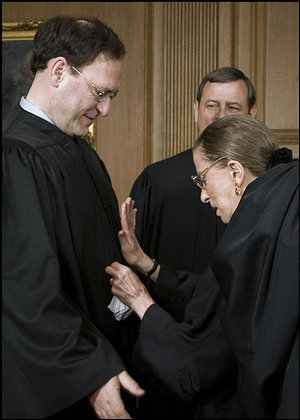 #NotoriousRBG #RuthBaderGinsburg #Feminist
I understand you guys all admire the Notorious RBG as much as I do. I ran across the next very interesting piece of info. Check it out!

Twenty years ago today, Ruth Bader Ginsburg arrived at the Supreme Court, ready to show her fellow justices, the nation, and the world why they call her the Baddest Bitch. But unlike some of the losers (see picture below) who have joined the Court in past, RBG was superstar before she was even nominated. A twirling squad virtuoso, a beast of law schools, Columbia Law School’s first female tenured professor, a women’s rights champion who helped establish in a series of cases a constitutional basis for gender equality, a master of the DC Circuit, and on and on, she had already earned the title of Real Bad Gangsta. But her power, stature, and Badness has only grown in the past 20 years, as we all well know.

I really like this picture.How does one properly pay tribute to Ruth Bader Ginsburg? Words are so futile in the face of such a task.
Did you know that RBG came to the Court the day after her beloved husband Marty died to read an opinion in a 5-4 decision that she had authored? “It was so hard, but Ruth is just so strong,” one of her fellow justices said, according to Supreme Court reporter Marcia Coyle’s new book, The Roberts Court: The Struggle for the Constitution. Ruth Bader Ginsburg is indeed struggling for the Constitution on the current conservative Court, struggling for all of us. What can we possibly do to repay here?
There she is with Marty, back in the day.The answer is, there is nothing we can do to repay her, because her contributions to this country and on the Court are invaluable. Let’s just hope she remains the Supreme Court for another 20+ years. It’s about time we had a supercentenarian justice.
Because I guess it’s fitting, I was going to include the video of President Bill Clinton announcing his nomination of the Baddest Bitch, but the YouTube video of it apparently can’t be embedded (it seems the Clinton Library jealously guards its ever so valuable videos), so whatever, here’s the link. It’s starts at the good part (where RBG starts talking). Well anyway, here is a picture from the big day 20 years ago that I just found. I love you RBG!!!!!!