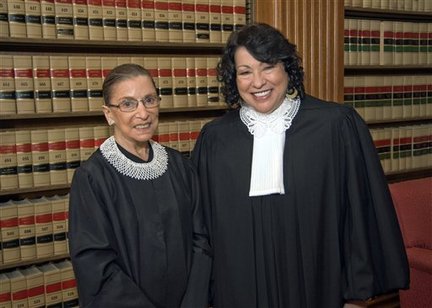 #NotoriousRBG #RuthBaderGinsburg #Feminist
I know you guys all admire Ruth Bader Ginsburg as much as I do. I came across the following very interesting article. Sweet beans!

I know I’m a little late to the party, but on Tuesday, the Supreme Court decided Schuette v. Coalition to Defend Affirmative Action. If you haven’t heard about the case yet elsewhere, then it’s really surprising that you’ve somehow arrived at this blog. So I’m not going into great detail about the actual decision. I’m also not going into detail about it because I haven’t bothered to read most of the plurality opinion, Breyer’s concurring opinion (ugh), or Scalia’s putrid bile (I know that’s what is even if I didn’t read it). I read the summary, which I feel is enough to form an ill-informed opinion.

What I did read in its entirety, though, was Justice Sonia Sotomayor’s thundering dissent, which Real Bad Gangsta joined. I would like to imagine that after RBG’s awe-inspiring dissenting opinion in the Shelby County case last year, she wanted to give Justice Sotomayor her time to shine. As I have vaguely alluded to on several occasions (since I’ve been too lazy to write a full post), Justice Ginsburg has been the leading voice of racial justice on the Court over the past twenty years. With her dissent in Schuette, Justice Sotomayor shows that she is ready to carry on that legacy, too.
In truth, with her dissent in this case, it seems Justice Sotomayor was using a somewhat limited vehicle to make a much larger statement about the Court’s approach to race. I almost wonder if this is a preemptive strike, if Kennedy has changed his mind and the justices know there are now five votes in favor of the colorblind view of the Constitution in some future case. It’s especially interesting that Justice Sotomayor would write this opinion, even though she didn’t join RBG’s dissent in Fisher last June. Maybe she now wishes she had.
Whatever the reason for the ferocity of the dissent, Sonia didn’t hold back. She directly challenged the notion of a colorblind constitution, which four current justices have openly endorsed, stating that, “We should not turn a blind eye to something we cannot help but see.” Even better, she criticized current Equal Protection precedent which requires strict scrutiny be applied to any consideration of race, writing that “those precedents…have departed from the mandate of the Equal Protection Clause in the first place, by applying strict scrutiny to actions designed to benefit rather than burden the minority.” Since the 1970s (and perhaps earlier), some justices had stated that even policies designed to benefit people of color should be subject to strict scrutiny. But not until the 1995 case Adarand v. Peña did that view achieve a majority vote on the Court. Even after 19 years as precedent, Justice Sotomayor is willing to say that’s wrong.
Justice Sotomayor cited RBG’s dissents five separate times in total, and she uses much of her dissent to serve one giant and well-deserved bitchslap to the conservatives on the Court. She exposes Scalia’s towering ignorance, and she even managed to hurt John Roberts’ feelings. Sotomayor parenthetically quotes Roberts’ lamentable admonition from the 2007 Parents Involved case that “[t]he way to stop discrimination on the basis of race is to stop discriminating on the basis of race,” and then adds that Roberts’ view “is a sentiment out of touch with reality, one not required by our Constitution, and one that has properly been rejected as ‘not sufficient’ to resolve cases of this nature.” (The Chief Justice issued a concurrence just so he could tell Justice Sotomayor that “[p]eople can disagree in good faith on this issue.” Pinche pendejo!)
And then, ascending into the league of Supreme Court superstars, Justice Sotomayor writes this:
“Race matters. Race matters in part because of the long history of racial minorities’ being denied access to the political process. […] Race also matters because of persistent racial inequality in society—inequality that cannot be ignored and that has produced stark socioeconomic disparities. […] And race matters for reasons that really are only skin deep, that cannot be discussed any other way, and that cannot be wished away. Race matters to a young man’s view of society when he spends his teenage years watching others tense up as he passes, no matter the neighborhood where he grew up. Race matters to a young woman’s sense of self when she states her hometown, and then is pressed, ‘No, where are you really from?’, regardless of how many generations her family has been in the country. Race matters to a young person addressed by a stranger in a foreign language, which he does not understand because only English was spoken at home. Race matters because of the slights, the snickers, the silent judgments that reinforce that most crippling of thoughts: ‘I do not belong here.’
“In my colleagues’ view, examining the racial impact of legislation only perpetuates racial discrimination. This refusal to accept the stark reality that race matters is regrettable. The way to stop discrimination on the basis of race is to speak openly and candidly on the subject of race, and to apply the Constitution with eyes open to the unfor­tunate effects of centuries of racial discrimination. As members of the judiciary tasked with intervening to carry out the guarantee of equal protection, we ought not sit back and wish away, rather than confront, the racial inequality that exists in our society. It is this view that works harm, by perpetuating the facile notion that what makes race matter is acknowledging the simple truth that race does matter.”
That needs to be quoted in full. I think it’s worth keeping in mind that Roberts’ line about discrimination in Parents Involved did not refer directly to an affirmative action program, but to a policy to increase diversity in K12 schools. In other words, there was no issue of “merit” involved, and every student still got to go to school under the challenged program in that case. So Roberts’ complaint about “discriminating on the basis of race” is not just the simplistic appeal to “merit” that many opponents of affirmative action use. He, and those who agree with him, apparently believes that talking about race is itself the problem. Fortunately, there are two bad bitches on the Court ready to take on him and the other conservatives. Hopefully it won’t always have to be in dissent.

This has been another post only tangentially about RBG. I could also talk about what John Paul Stevens has said about RBG approaching him for advice about when to retire. Or I could talk about this article in which the author confirms the obvious: RBG is still the Baddest Bitch.