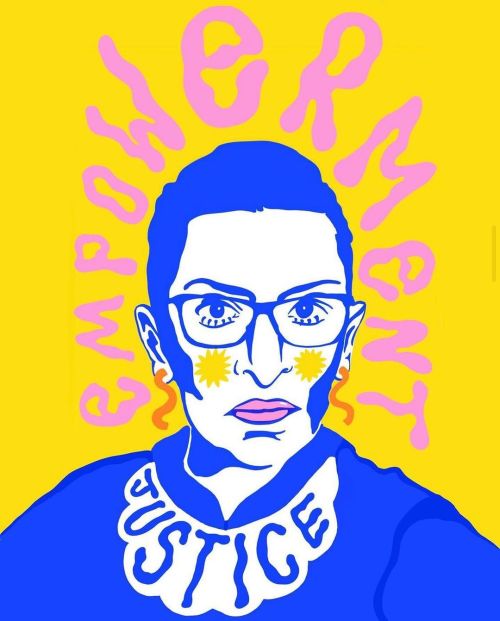 It’s hard to believe that RBG has been gone for an entire year. But even in her absence, she continues to inspire people of all ages, genders, and backgrounds to fight for a more equal and just society. In the past year, so many artists from around the world have honored her memory, so here are a few of our favorites. As always, the fight continues.
https://www.instagram.com/p/CT92fZXgj96/?utm_medium=tumblr

Justice Ruth Bader Ginsburg was the second woman to serve on the Supreme Court and the first to become a pop culture icon.

#NotoriousRBG #RuthBaderGinsburg #Feminist
I came across the next very interesting video clip. I can tell you all admire RBG just like I do. Take a look!

“Feminism holds the most hope for the world”

EUI journalist Olivia Arigho-Stiles speaks to Ruth Bader Ginsburg, Associate Justice of the U.S. Supreme Court and the second woman to be appointed to the position.
They discuss the efforts made by feminists to break down barriers against women as well as continued challenges to women’s rights in Europe and the US.

The death of U.S. Supreme Court Justice Ruth Bader Ginsburg will have a significant effect on the election, mobilizing voters and fundraisers on both sides of the fray.

Watch The National live on YouTube Sunday-Friday at 9 p.m. ET

Justice Ruth Bader Ginsburg died on Friday at age 87. She once said, “If you want to be a true professional, you will do something outside yourself. That’s what I think a meaningful life is.” Weekend TODAY looks back at her remarkable life and legacy, in her own words.
» Subscribe to TODAY: http://on.today.com/SubscribeToTODAY
» Watch the latest from TODAY: http://bit.ly/LatestTODAY

About: TODAY brings you the latest headlines and expert tips on money, health and parenting. We wake up every morning to give you and your family all you need to start your day. If it matters to you, it matters to us. We are in the people business. Subscribe to our channel for exclusive TODAY archival footage & our original web series.

Remembering Ruth Bader Ginsburg, In Her Own Words | TODAY

On September 3, 2019, the Clinton Foundation and Clinton School of Public Service hosted the Frank and Kula Kumpuris Distinguished Lecture Series featuring the Honorable Ruth Bader Ginsburg. Justice Ginsburg discussed her quarter-century on the nation’s highest bench and historic legal career prior to being nominated by President Bill Clinton to serve as the second female Associate Justice of the Supreme Court.

Justice Ruth Bader Ginsburg died Friday, and the nation suffered one more loss in a year replete with them. Bill Whitaker ends the broadcast with a note about the woman’s rights pioneer.

Get the latest news and best in original reporting from CBS News delivered to your inbox. Subscribe to newsletters HERE: http://cbsn.ws/1RqHw7T

Get your news on the go! Download CBS News mobile apps HERE: http://cbsn.ws/1Xb1WC8

Get new episodes of shows you love across devices the next day, stream local news live, and watch full seasons of CBS fan favorites anytime, anywhere with CBS All Access. Try it free! http://bit.ly/1OQA29B

—
60 Minutes, the most successful American television broadcast in history, began its 52nd season in September. Offering hard-hitting investigative reports, interviews, feature segments and profiles of people in the news, the broadcast began in 1968 is still a hit in 2020. 60 Minutes makes Nielsen’s weekly Top 10 nearly every week and was the #1 weekly television broadcast three times last season.

The program still averages more than 10 million viewers, more than double the audience of its nearest network news magazine competitor. The average audience for a 60 Minutes broadcast is 150% higher than those of the network morning news programs; the audience dwarfs the number of viewers drawn by the most popular cable news programs.

About a million more people listen to the 60 Minutes radio simulcast in several major cities and on its companion podcast. Tens of thousands each week experience 60 Minutes online. The broadcast’s segments can be watched at 60Minutes.com and on the CBS All Access app. Its webcast, 60MinutesOvertime.com, offers content originally produced for the web, including behind-the-scenes video about the production of 60 Minutes stories and timely archival segments.

The supreme court justice Ruth Bader Ginsburg, arguably the single most important woman lawyer in the history of the American republic, has died from complications of metastatic pancreatic cancer. She was 87 years old.

Appointed by Bill Clinton in 1993, Ginsburg was a stalwart of the court’s liberal bloc, which Donald Trump appears now to have the opportunity to confine to a minority for a generation.
Later nicknamed RBG, Ginsburg was an icon, especially for women, and provided an essential vote in watershed rulings that combatted gender discrimination and protected abortion rights, equal pay, civil liberties and privacy rights.

What does Ruth Bader Ginsburg’s death mean for the supreme court? ► https://www.theguardian.com/us-news/2020/sep/18/ruth-bader-ginsburg-supreme-court-faq-explainer