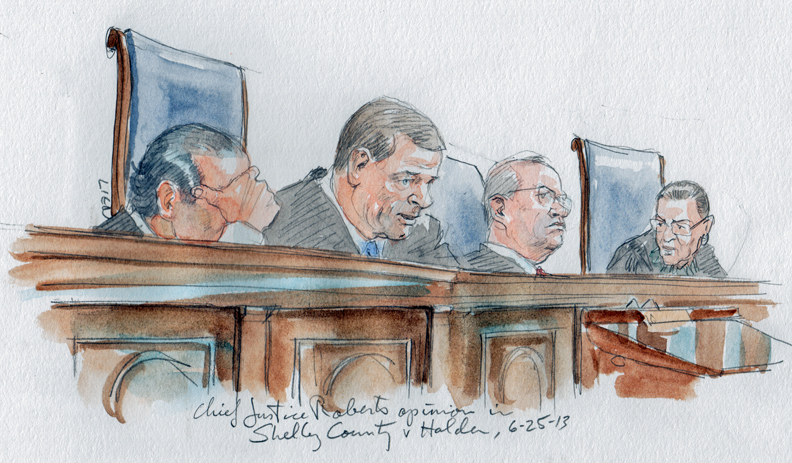 This says it all. Scalia should always cover his pathetic face. (From SCOTUSBlog.)
“Hubris is a fit word for today’s demolition of the VRA.”
So wrote the Baddest Bitch today in her amazing dissent from the conservative skunk majority decision today overturning Section 4 of the Voting Rights Act (VRA). I’m sad to say my prediction from January was right: RBG wrote the dissent and there were fireworks. But it doesn’t take away from the pain of what the majority actually did. But at least RBG showed the majority for what they are: heartless and probably racist clowns in robes who lack even a shred of intellectual honesty.
There are not words enough to express my contempt for Chief “Justice” John Roberts.
(Shit, this post is going to be long. Just go to the bottom if it gets boring.)
Section 5 of the VRA requires certain states and other jurisdictions to get preclearance from the Department of Justice or a DC Court of Appeals when they want to change their election laws. Most places covered are in the South…you know, the places where Black people used to be property under the law, not people. Some other places are included as well, for the most part places where there have been issues for non-English speaking voters. Section 4 of the VRA lays out the formula for places are covered by preclearance. The majority ruled that the Section 4 formula for what places are covered is unconstitutional because, well, it’s not fair to not let the South just be racist. Technically, they upheld the Section 5 requiring preclearance, but unless Congress does something about this (P.S.—they won’t), Section 5 is inoperative for the time being.
Chief Asshat Roberts’ opinion is so moronically absurd that explaining it will sound like satire. Because the preclearance was worked for the covered jurisdictions and they’ve been prevented from implementing racist voting policies, the rates of registration and voting for people of color is generally at parity with white voters in the covered jurisdictions. So because it’s working….it’s now unconstitutional, because it must no longer be necessary. Further, according to the majority, it violates state’s rights to enshrine white supremacy in their voting laws. According to Roberts, the majority was left “today with no choice but to declare” Section 4 unconstitutional. UGH
In her dissent, Real Bad Gangsta, joined by Justices Breyer, Sotomayor, and Kagan, tore the majority apart, noting its “most disturbing lapses.” She begins by giving the historical need for the VRA, talking about Congress’ motivation for passing it in the first place and their constitutional power to do so. Then she discusses Congress’ reauthorization of the VRA in 2006, including the extensive record they compiled documenting the many laws and policies prevented by preclearance in the 25 years before the 2006 reauthorization, including many instances of “serious and widespread intentional discrimination.” In essence, in response to the majority’s claim that, oh gosh, there’s barely any discrimination at all anymore, Congress, including every voting senator and an overwhelming majority in the House, found discriminatory voting policies to be widespread enough still in 2006 to require reauthorization of the VRA.
After this, RBG really goes after Roberts, saying that the majority pretty much ignored many of the basic rules of deciding cases. That’s where she criticizes his hubris. She also calls him out for using “pure dictum” from the Court’s decision in another, much narrower VRA case from a few years ago as precedent to strike down Section 4 today, ignoring the VRA precedents that are actually relevant. That case (just Google “NAMUDNO” if you want more info) was an 8-1 decision in 2009. All the liberals signed at the time likely because it avoided reaching the broader constitutional question reached today and instead ruled on the most narrow grounds possible. Roberts, in his opinion today, tried to use that against Justices Ginsburg and Breyer, by noting that the two of the dissenters today joined that opinion. Yesterday, I was wondering why RBG was the only dissent in Fisher. Why wouldn’t at least Sotomayor join her dissent, for example? Or why wouldn’t RBG just join the majority and its narrow ruling? Today might have been the answer. These conservative skunks have fooled the liberals before into joining “narrow” rulings that they later use to further their ultra conservative ideology. So maybe the Baddest Bitch wanted to avoid that mistake with Fisher.
Here’s another good line from RBG: “Throwing out preclearance when it has worked and is continuing to work to stop discriminatory changes is like throwing away your umbrella in a rainstorm because you are not getting wet.”
And some more: “In truth, the evolution of voting discrimination into more subtle second-generation barriers is powerful evidence that a remedy as effective as preclearance remains vital to protect minority voting rights and prevent backsliding.”
Perhaps the only silver lining (and irony) of today’s majority is that the conservatives proved they’re not partisan: they struck down a law passed by a Republican Congress and signed by a Republican president.
Tomorrow is DOMA and Prop 8. But really, who cares? The VRA is dead. I guess the equality of some is more important than the equality of others. Probably DOMA will be overturned and the Prop 8 case dismissed on standing, so there will be gay marriage in California. My only hope is that if Kennedy’s vote proves pivotal in favor of gay marriage in either case, no one will try to credit him with being anything other than a vile, slithering creature. Because as his vote today, and in numerous other cases, proves, that’s what he is.
Fuck John Roberts. C-c-c-cold hearted SSSSSNAKEAnd infinite love for our Immortal Goddess Ruth Joan Bader Ginsburg.