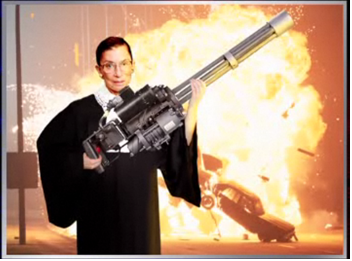 #NotoriousRBG #RuthBaderGinsburg #Feminist
I understand you guys all admire the Notorious RBG just like I do. I came across the next very interesting blog. Sweet beans!

It’s the Baddest Bitch’s birthday, duh. RBG, aka Real Bad Gangsta, aka $$$upreme Court Justice Ruth Bader Ginsburg turns 81 today. As she nears her middle age, I think it’s important to remind everyone that she will stay on the Court as long as she fucking wants to.
That car was filled with pundits telling RBG to retire. Good move, Justice.Each week seems to bring some new chump writing the same tired article about why Justice Ginsburg should retire because she’s “old” blah blah blah. Apparently these pundits think that octogenarians should just stop contributing to the world. Maybe RBG is at the top of her game because she’s 81. She’s not going to retire just because the Senate Republican caucus is filled with maniacs.

And why should RBG retire? Shouldn’t everybody be clamoring for Roberts, Scalia, Kennedy, Thomas, and Alito to step down considering that, you know, they are the ones bringing ruin to the country with their awful ultra-conservative opinions? Let’s keep the one who’s actually helping.

So happy birthday Justice Ginsburg!!! Thank you for continuing to serve our country even after a long career fighting for justice. I’m looking forward to the next 100+ years of your tenure on the Court!

Oh, and here, just for filler, is a 90-minute video from last fall of RBG speaking to Jeffrey Rosen at the National Constitution Center. I like what she says about Footnote 4. http://static.c-span.org/assets/swf/CSPANPlayer.1393874500.swf?pid=314892-1