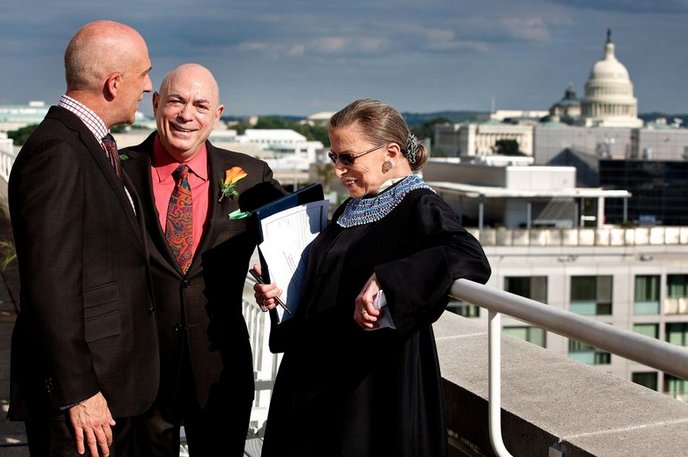 #NotoriousRBG #RuthBaderGinsburg #Feminist
I understand you all admire RBG as much as I do. I ran across the following very interesting article. Sweet beans!

I finished reading Jeffrey Toobin’s most recent book, The Oath, the other day. I now understand why it’s on the 50%-off cart at the book store I work at. But I wouldn’t even buy it at 50% off (I got it from the library—P.S., I’m poor). And you see those parentheses I just used? If you read Toobin’s book, get ready for a lot more of them. This man apparently knows of no other stylistic device to insert a side comment. I mean, I use parentheses a lot too, but you don’t see me getting a book published.
Honestly, did anyone edit it? And not even for style, but for content? After the first chapter or two, I was thinking, This is better than I expected. I just thought it would be a pile of CNNesque garbage. But that thought soon ended and CNNesque garbage abounded. It was little more than a collection of only vaguely interesting and mostly unoriginal chapters about the Supreme Court. Ruth Bader Ginsburg is impressive and strong. Stephen Breyer is sad. Sandra Day O’Connor is disappointed. David Souter is happy. Antonin Scalia is angry. Anthony Kennedy is a dick. Clarence Thomas is actually important. John Roberts is a Republican. And so on. If it weren’t for my unhealthy obsession with constitutional law and the Supreme Court, I’d never have gotten through it.
Really, don’t bother with this book. If you want a recent book-length account of the Court, for whatever reason, go for Marcia Coyle’s The Roberts Court: The Struggle for the Constitution, which came out in May. It’s interesting, insightful, and actually has a unifying purpose which ties the various parts of the book together. What a thought. If you knew nothing of the authors other than one appears on PBS and the other appears on CNN, you’d have no trouble figuring out who wrote what. The one with the stink lines emanating from it was written by the CNN contributor. If someone gives you The Oath as a gift, see if you can exchange it for Marcia Coyle’s book.
Remember back when I still wrote stuff for this blog? Here’s some stuff, I guess:
Ruth Bader Ginsburg keeps officiating gay marriages. All the ones I’ve read about her officiating so far seem to have been among white gay men (though I could be wrong). Interesting…
Just chillin at a gay weddingHere’s a synopsis of a post I wrote half of back in August and will probably never finish: Ruth Bader Ginsburg is a champion of racial justice on the Court, more than any other justice since Thurgood Marshall (I’ve decided to say). There are her opinions (mostly dissenting) in Fisher, the Voting Rights Act case, Ricci, Grutter, Gratz, Miller v. Johnson, Adarand v. Peña, and maybe some others. I’ve written about her opinions in a few of those cases in other posts. She usually argues that centuries of past legal racial discrimination in this country, both affecting the particulars of some the cases and affecting American society generally, is more than enough justification for race-conscious remedies at issue in these cases. I was also going to make a parallel to her career fighting for women’s rights and her staunch support of racial justice, highlighting the comment she made during her speech following her nomination to the Court where she thanks the Civil Rights Movement, among others, for setting a path for the women’s rights activists of the late ‘60s and ‘70s.
So yeah, I hope you would have liked that post.
I feel like I’m obligated to say that Ruth Bader Ginsburg is the Baddest Bitch. Maybe I’ll write something meaningful some day.