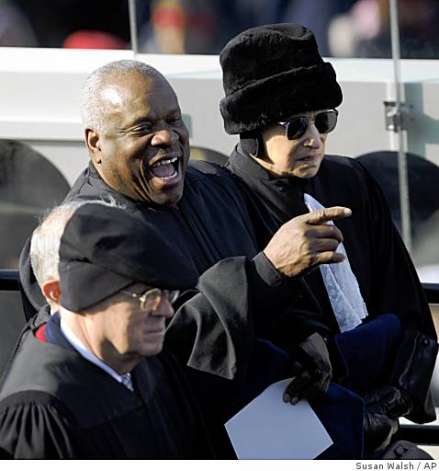 Supreme Court Justice Ruth Bader Ginsburg, aka RBG, aka Real Bad Gangsta, aka the Baddest Bitch, pulled through for us all again today, even if the rest of the Court didn’t. (The Roberts Court=Basic, as usual.)

The affirmative action case that I’ve discussed before, Fisher v. University of Texas, was officially decided today, eight and a half months after it was argued. In a 7-1 decision (with Justice Kagan recused), the Supreme Court ruled that the Fifth Circuit decision on the case is vacated the Supreme Court ordered it remanded for further proceedings. Of course, it’s all utter bullshit. This clearly isn’t the decision they were going to give all along, otherwise it wouldn’t take them the whole fucking term. Justice Kennedy was probably just being a dick as usual, who too scared to actual come to a decision like a real grown-up justice, and instead decided to come to a compromise everyone could agree on…everyone but the Baddest Bitch, that is. Before I go into why RBG=God, I’ll explain why the majority opinion is stupid.
Justice Kennedy wrote that the Fifth Circuit didn’t properly apply strict scrutiny to UT’s consideration of race and that they didn’t properly apply Grutter (precedent, blah blah blah). But if you read the Fifth Circuit decision, they clearly applied it. Even one of members of three-judge panel that heard the case (and ruled unanimously in favor of UT) said he believes Grutter was wrong but that UT’s program is clearly in line with it. I guess this decision by the Supreme Court is better than striking down UT’s affirmative action program or overturning Grutterentirely, but it’s clearly a political compromise—often a good thing, but usually less flattering when it happens on the Supreme Court. And Kennedy just annoys the shit of me these days. He thinks he’s such hot shit.
First, I must say, RBG bless RBG for keeping her opinion only four pages long. In it, she said that she believes that the lower court properly applied Grutter to UT’s program and that UT’s program clearly follows Grutter. Grutter Grutter Grutter. But then she goes on to explain why the majority’s admonition that both UT and the lower court need to determine whether UT can properly achieve the diversity they seek in “race-neutral” ways is nonsense. “I have said before and reiterate here,” she writes, “that only an ostrich could regard the supposedly neutral alternatives as race unconscious.” Damn, calling the majority ostriches.
She then explains that the Top Ten Percent plan that UT’s uses to increase diversity depends entirely on the premise that Texas high schools remain largely segregated on basis of race. She says, “It is race consciousness, not blindness to race, that drives such plans.” In a footnote to that opinion she quotes some law professor in a perfect bitch slap to those who call for “race neutral” means as those only acceptable way to consider race: “If you think that you can think about a thing inextricably attached to something else without thinking of the thing which it is attached to, then you have a legal mind.” She then adds in her own words, “Only that kind of legal mind could conclude that an admissions plan specifically designed to produce racial diversity is not race conscious.” I love that Real Bad Gangsta is essentially criticizing Kennedy for thinking like a lawyer.
She goes to say that we “need not be blind to the lingering effects of ‘an overtly discriminatory past,’ the legacy of ‘centuries of law sanctioned inequality,’” in contrast to what the ultra-conservatives on the Court say. See, I knew it all along. The Immortal Honorable Ruth Bader Ginsburg once again stands up for racial justice, even when she’s the lone dissent.
Aside from the Baddest Bitch’s opinion, my favorite part of the Fisher opinions was Justice Clarence Thomas’ opinion, which more or less said supporters of affirmative action today are exactly like segregationists and even slaveholders. From page 11 of his opinion: “Yet again, the University echoes the hollow justifications advanced by the segregationists.” A few pages later, shortly after mentioning RBG’s dissent, Justice Thomas says that “Slaveholders argued that slavery was a ‘positive good’” for slaves. A pretty funny attempt to equate RBG with slaveholders, I must say.
See, Justice Thomas finds it funny too. He can’t possibly be serious.Real Bad Gangsta also wrote dissents in two 5-4 conservative, pro-employer/anti-employee decisions today, where she castigates the conservatives. I’ll cover these soon (I think), including Justice Samuel “Basic Bitch” Alito’s affront to RBG on the bench today (documented here…I’ll just plagiarize later).
Oh yeah, the Voting Rights Act…that’s not gonna go well. My guess, based on nothing, is that they’ll gut it when opinions are released again tomorrow. And then the gay stuff….blah blah blahwho even cares anymore.
PS–Why has there been a sudden and very large spike today in the views this blog is getting???