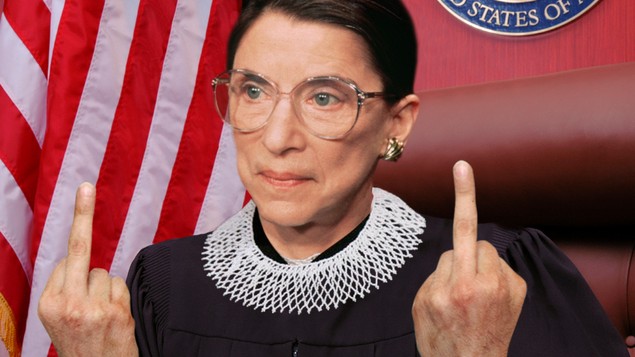 RBG has been giving interviews lately that show why the call her the Baddest Bitch. I’m too lazy right now to make this a well-written or organized post but here some highlights:

In an interview last month with Supreme Court reporter Joan Biskupic, America’s favorite justice revealed that she again broke two ribs this last May, having also broken her ribs last year. “‘I knew immediately what it was this time,’ she said, adding that there was nothing to do but take pain killers and wait out the six weeks as her ribs healed. […] Ginsburg was examined at the Office of the Attending Physician at the Capitol and then went about her regular schedule.” Seriously, what the fuck. NOTHING can stop this woman. She truly is immortal…I didn’t even know how true it was when I first said it.

Real Bad Gangsta also says she’s going to resist all pressure from liberals who will call on her to retire so that President Obama can appoint her successor. Biskupic reported, “Ginsburg referred to past liberal commentary and predicted, ‘That’s going to start up again.'”In considering whether to retire, RBG says, “It really has to be, ‘Am I equipped to do the job?’ … I was so pleased that this year I couldn’t see that I was slipping in any respect.” You’re DAMN RIGHT she’s not slipping! Want proof? Just three words: Shelby County dissent.  (By the way, I love that the spell check suggestion for “Biskupic” is “Bisquick.”)

When discussing when she predicted she might retire, “She has previously said she wanted her tenure to at least match the nearly 23 years of Justice Louis Brandeis, which would get her to April 2016, and said she had a new ‘model’ in Justice Stevens, who retired at age 90 after nearly 35 years on the bench.” I love this Bitch so much. This is basically what she’s saying to people who want her to retire:
“You’d be best off sittin your tired ass down.”
The Baddest Bitch added, “I wonder if Sandra regrets stepping down when she did?” I can’t. OMGinsburg, that’s sassy. And when asked how she felt about Justice “Basic Bitch” Alito making faces while she read a dissent during one of the last days of the term, she said “I’m in such good company. I’m in the company of the president.”

In a separate interview with the Associated Press, RBG talked about the new voter suppression efforts that some Southern states have passed in the aftermath of the VRA decision. “I didn’t want to be right, but sadly I am.” RBG knows all. RBG is God.
“You will pay for what you’ve done, John Glover Roberts. One day, you will pay…”
In an interview with USA Today that USA Today chose to call a “rare interview,” the Baddest Bitch said, “I think now I am the hardest-working justice. I wasn’t until David Souter left us.” Hell yes, Bitch, hell yes. And come on, don’t sell yourself short: We all love David Souter, but he left the Court after less than two decades. He was still in his 60s, for Christ’s sake! He can’t have been working that hard.

And apparently I have some of the same work habits as Real Bad Gangsta, who “works late into the wee morning hours,” according to Goowdin Liu, a former clerk for RBG who now serves on the California Supreme Court. “It was not infrequent for law clerks to get messages left on their voicemail at 2 or 3 a.m., because that was her prime time.” It must be hell getting up for oral arguments in the morning, though.

So yeah, there it is. The Baddest Bitch will never stop, so don’t even think about it.
P.S. — Please marry me, RBG. I can bake, too, just like your first husband!