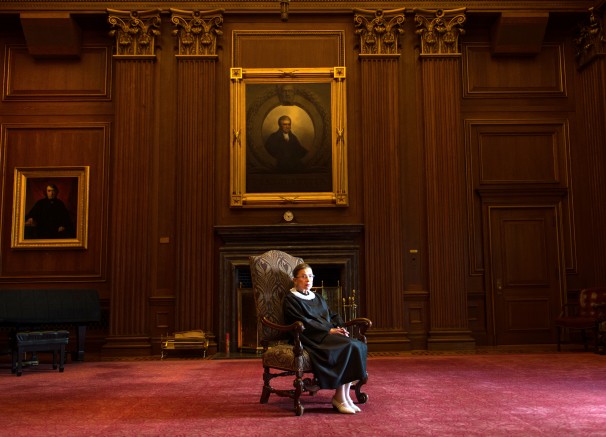 There was that Washington Post Magazine cover article this week which revealed the obvious: Ruth Bader Ginsburg, the Baddest Bitch, isn’t retiring anytime soon. Seriously people, let it go. She’s a god; she’s immortal; she’s knows all, including that a Democrat will win the presidency in 2016, so why would she ever retire? The cover states “she isn’t ready.” That may be true, but really, America isn’t ready. We need her more than she needs us, I’m sure.

Too lazy right now to do anything other than just take the pictures the article already had.But maybe those calling on her to step down are right…she should step down to run for president in 2016! RBG knows a Democrat will win, so why shouldn’t it be her? She can follow in the footsteps of Charles Evans Hughes, who resigned from the Court in 1916 to be the Republican nominee for president, except she’ll actually win. And then when she’s a 110 years old and a former president, she can pull a Taft be nominated to be Chief Justice when John Roberts finally retires. Then she’ll serve on the Court for another, oh let’s say, 50 years and the United States will have entered the halcyon Era of Ginsburg.

Soon I might write a post about the Baddest Bitch being a hero for racial justice. Just as she’s a women’s rights icon and a gay rights icon and an icon of humanity in general. I actually started writing that post over a month ago, but, you know, things….